In June, the Mongolian grasslands have clear sky and clear weather. At present, LOVOL has more than 10,000 sets of large, medium and small tractors and wheat harvesters in the Mongolian market. In order to "escort" users during the farming season, the overseas business department initiated the "LOVOL 20 Years, Servicing Eternal "Following users to visit Wanlixing" activity has entered its second month in Mongolia. 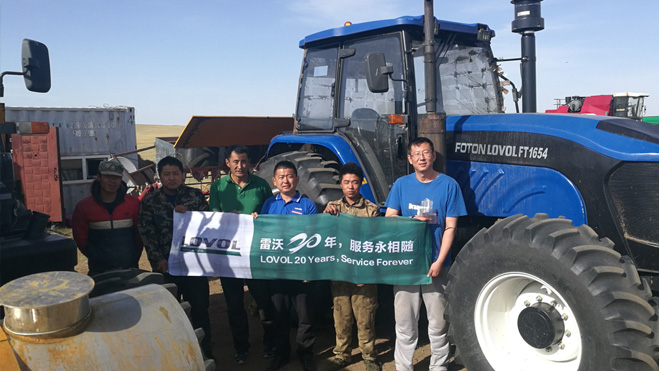 The 43-year-old Otbayar is the first person in Mongolia to purchase LOVOL tractors and the first batch of beneficiaries of LOVOL products. Since buying this LOVOL MG1654 tractor, with his diligent hands, he has cultivated a lot of wasteland and became a well-known "landlord", and his life is getting better and better. Every year in July and August when the livestock is fatter, the Naadam Conference is held in the capital Ulabator. During the conference, Otbayar will personally rode his horse for three days and three nights, from Selenga Province to the LOVOL Mongolian Service Office in Urabato, and send him to the LOVOL service engineer at the station. The beef and mutton jerky made by himself, expressing his gratitude to Revo. This behavior has persisted for 5 years, so he also forged a deep friendship with the LOVOL service engineers. Of course he became the key customer of this visit.

On the morning of June 6, the LOVOL service team came to the home of Ottenbayar in Selenga Province. This sturdy Mongolian man is driving his LOVOL MG1654 tractor to open up wasteland on the Mongolian grasslands in preparation for planting wheat in the rainy season. After the LOVOL service team overhauled his tractor, Ottenbayar was very happy and said: "The swan geese from afar are here, there is no problem that can't be solved, you are my most distinguished guests!"

In 2016, the Fire Bureau of Darkhan Province of Mongolia purchased 25 LOVOL high-horsepower tractors for snow removal operations in winter. On the afternoon of June 12, when a group of LOVOL service team came to the compound of the bureau, the first thing they saw was 25 LOVOL TG1254 tractors neatly arranged on the parking lot, bright as new, majestic and majestic, as if The soldiers who are about to go out are the same.

The person in charge of the fire station told the LOVOL service team that in the winter of 2017, Mongolia encountered a rare blizzard in history. The heavy snow continued for half a month, and the thickness of the snow was more than one meter, which brought a great deal to urban road travel. inconvenient. The firefighters used these 25 LOVOL tractors to clear snow day and night, and finally opened up the main roads of the city in 2 days, providing convenience for citizens to travel. During the snow removal operation, many citizens saw the beautiful LOVOL tractor and rushed to take photos with the tractor.

The LOVOL tractor runs continuously. With its reliable quality and excellent quality of endurance to heavy-duty operations, the fire department performed outstanding performances throughout the winter guarantee last year, and was awarded by the local municipal department and the provincial government. Now the fire department treats LOVOL tractors like close colleagues. Every day there are dedicated personnel for maintenance and inspection. In winter, they are driven to a heated warehouse for storage, because they are the most praiseworthy heroes.

With reliable quality and excellent service guarantee, LOVOL Heavy Industries allows every user to feel the enthusiastic service of LOVOL, which is favored by Mongolian farmers and herdsmen. At the end of the visit, the LOVOL service team members stood on the Mongolian prairie and looked at the roaring LOVOL tractors working in the distance. Every member felt a sense of pride. The Mongolian grassland is the hometown of the swan goose. Like the swan geese flying from a distance, LOVOL is working hard on the vast Mongolian steppe with full blessings.